According to the World Health Organisation, 51% of worldwide blindness is caused by cataracts – a figure that equates to around 20 million people. When broadened out to include all cases causing “moderate to severe disability”, the number of people estimated to be affected rises to 53.8 million.

The earliest known references to the condition come from the 29 AD De Medicinae, written by the Roman encyclopaedist Aulus Cornelius Celsus. There is also archaeological evidence that points to eye surgery being performed in Roman times.

The earliest written record of cataract surgery dates from around the 3rd or 4th Century AD, though that’s only the age of the surviving copy. The text itself is attributed to an Indian physician called Sushruta…who is believed to have lived as long ago as the 6th Century BC!

3) There are different types of cataract

Though we usually just refer to ‘cataracts’, there are actually three primary types of cataract. Nuclear Sclerotic, Cortical and Posterior Subcapsular. Of these, the Nuclear Sclerotic is the most common one. The use of ‘Nuclear’ refers to it gradually affecting the central ‘nucleus’ of the lens by clouding it. ‘Sclerotic’ refers to the hardening of that lens nucleus area. Initially, the changes caused by the development of this type of cataract may even improve close-up vision. This is only a temporary effect though.

‘Cortical’ cataracts are so-called because they affect the lens cortex, the outside edge of the lens. Light entering the eye is scattered and this can create blurred vision and problems with depth perception.

Posterior Subcapsular cataracts gain their name from the ‘posterior’ or back surface of the lens being the part of the eye affected. This type of cataract can develop very quickly, sometimes over only a few months. Symptoms can include “halo” effects.

4) Diabetes can increase the risk of cataracts

People with diabetes are more likely to develop cataracts and also to develop them at a younger age, particularly Cortical cataracts.

5) The only treatment for cataracts is surgery

The only treatment that will target the cataract itself is surgery. Options such as stronger glasses or using a reading light may bring symptomatic improvement in the early stages of a cataract but this improvement is unlikely to last.

6) You no longer have to wait for cataract surgery

7) A local anaesthetic is usually all you need

Operations can be carried out on a day-patient basis, with only a local anaesthetic required. At The Edinburgh Clinic, we do also give the option of general anaesthetic or sedation.

Cataracts tend to be age-related and, according to the NHS, over half of British over-65s have some stage of cataract development in one or both eyes.

9) The potential of artificial lenses as a cataract treatment was discovered during World War II.

Sir Harold Ridley was an ophthalmologist who treated RAF patients with eye injuries during the war. He noticed that when acrylic splinters from shattered cockpit canopies became lodged in the eyes of wounded pilots, the eye didn’t reject them in the way that it would reject glass. This observation led him to propose the use of artificial lenses as a corrective measure in cases of cataracts.

Cataracts can’t ‘grow back’ after surgery. The lens is the part of the eye that is affected by the cataract and it is removed and replaced with a plastic one, on which cataracts can’t develop. It is possible for some clouding of the membrane holding the new lens to occur, but were that to happen it can be cleared up with laser treatment and no further need for surgery.

How can The Edinburgh Clinic help with your cataract concerns?

Our comfortable and substantial waiting and treatment areas ensure a professional yet relaxing atmosphere whether you’re visiting us for treatment or an assessment.

You can be referred to this service by your GP or Optometrist.

What are the key signs of eye deterioration? 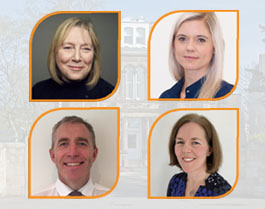 Preventing injuries to muscles, ligaments and joints when doing exercise